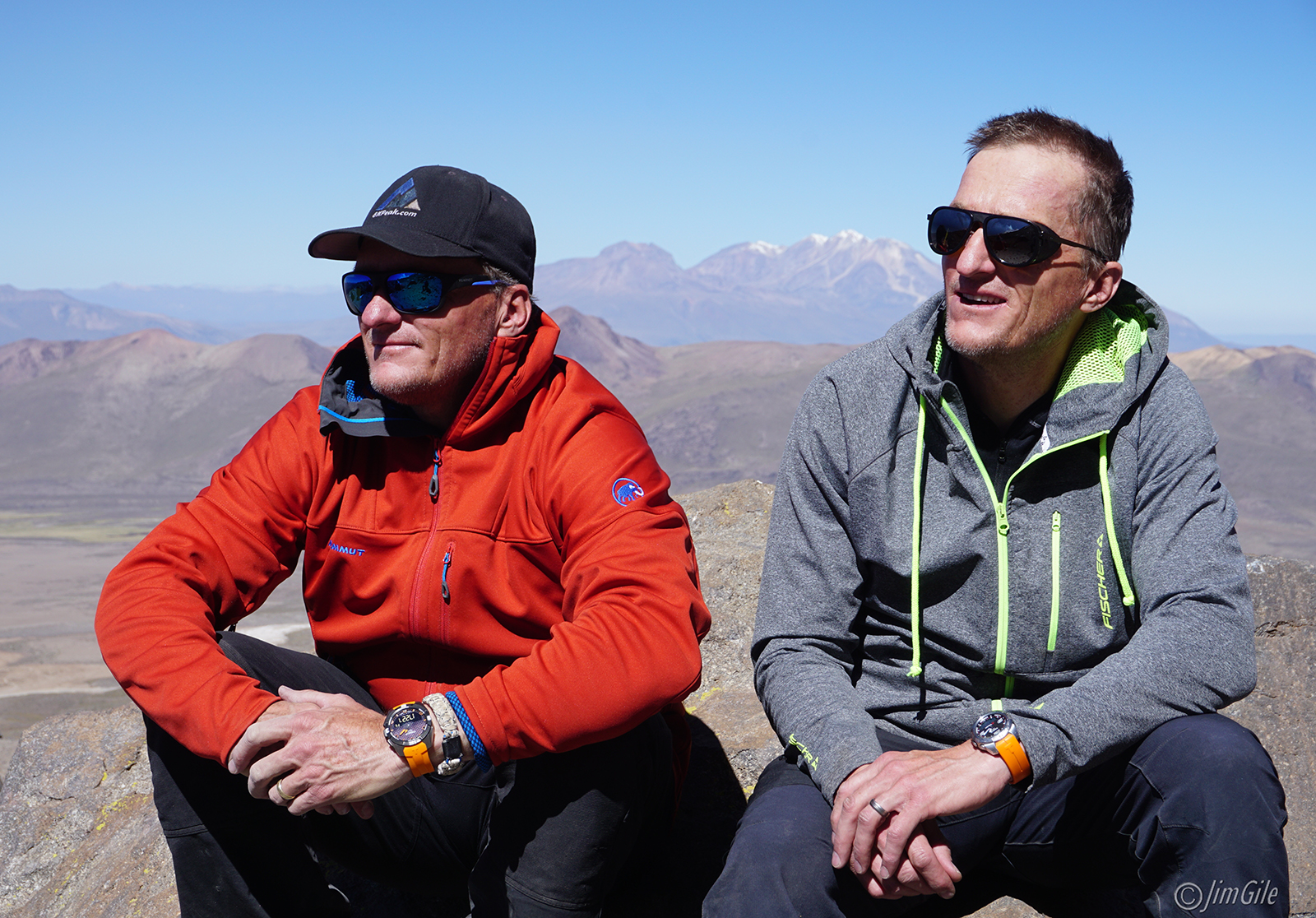 In 2000, CPAs, and identical twins Mike & Steve Marolt, along with their life-long friend Jim Gile, became the first Americans to climb and ski from above 8,000 meters (26,250 ft) when they skied from the central peak of Shishapangma, Tibet, placing them placed them amongst the world’s greatest ski mountaineers. In 2003, the team followed up with a first-ever American ski descent of the North Ridge of Everest. In 2007, they skied the North Ridge for a second time, and later that year, they became the first Americans ever to attain multiple ski descents from above 8,000 meters when they skied from the summit of Cho Oyu,Tibet.

Since then, they’ve completed ski descents from the world’s greatest peaks, including six from above 7,000 meters, making them the world leaders in high altitude ski descents. Their ski résumé spans over 30 years, with expeditions to 50 of the world’s highest peaks. They only climb “pure style,” using no supplemental oxygen, porters, or altitude drugs.

Mike, Steve and Jim have also established themselves as independent filmmakers, having produced eight adventure documentary films, including SKIING EVEREST, which won the Ski Channel’s Best Adventure Film of the Year in 2010 and premiered world-wide, including on ESPN and PBS. In 2017, the twins were inducted into the USA National Ski Hall of Fame.

Now, the trio is releasing BEYOND SKIING EVEREST, which premieres on June 30th on Apple TV. The film explores how they’ve naturally progressed from skiing their backyard mountains around Aspen to the world’s highest peaks, and reveals what is required for that level of success, in both the mountains and in life. 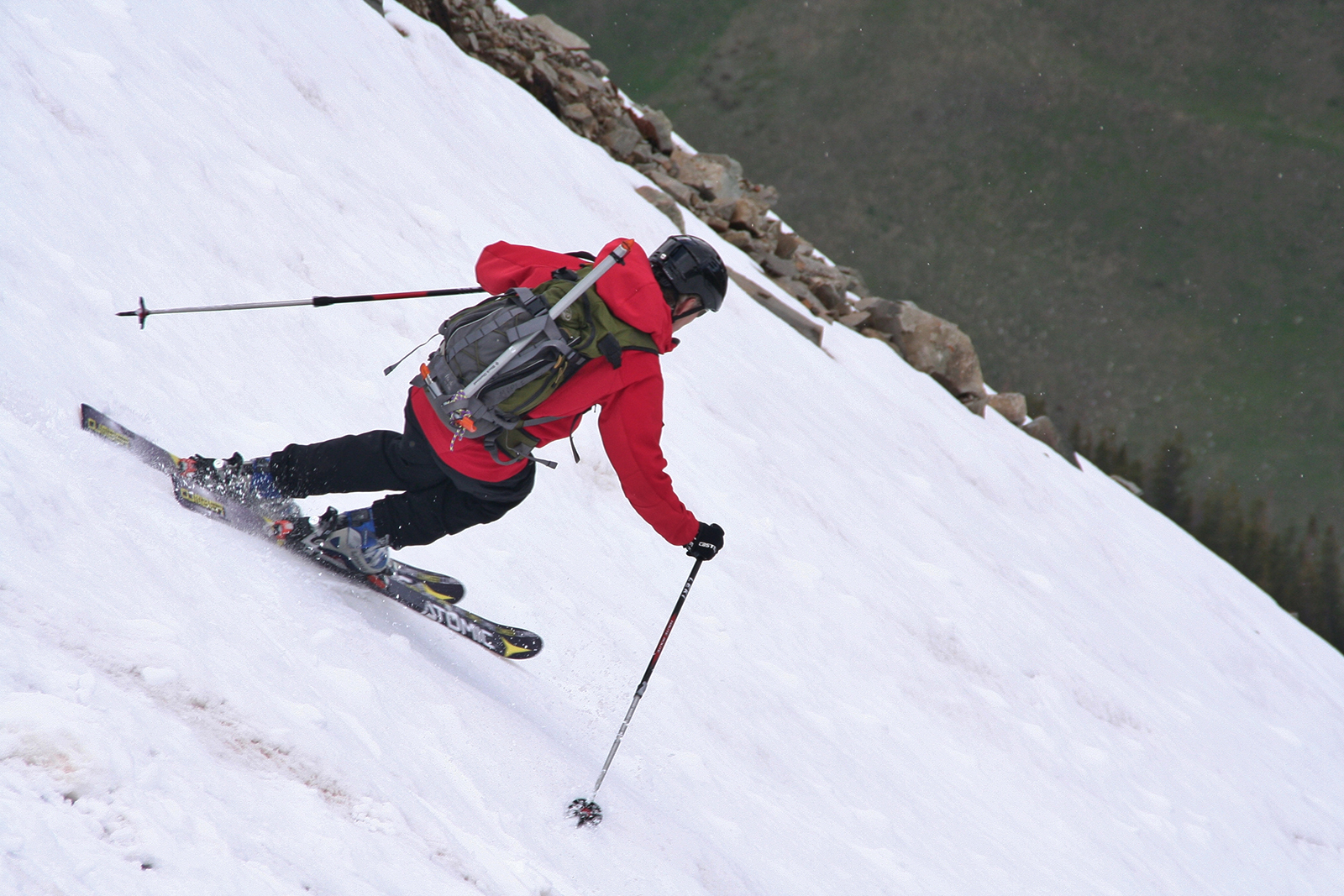 Which is the most challenging peak you have climbed and skied?

It would have to be anything in the most recent objectives, the winter Himalayan attempts. Climbing in the Himalaya in the winter is so drastically different than climbing during the normal season that it really is a completely different sport. We made a few winter attempts at a peak we’d climbed and skied in normal season, Mustagh Atta, and it really redefined the term “success.” The peak has still never been climbed in the winter due to cold and wind, and on the last attempt, just getting off the peak in 100 mph wind and -70 degree temps was without a doubt the most difficult day ever for us. It took us several hours to descend the last 1500 feet, which at one point had Steve cartwheeling across the slope in a gush of wind, and picked us all off the ground at times. 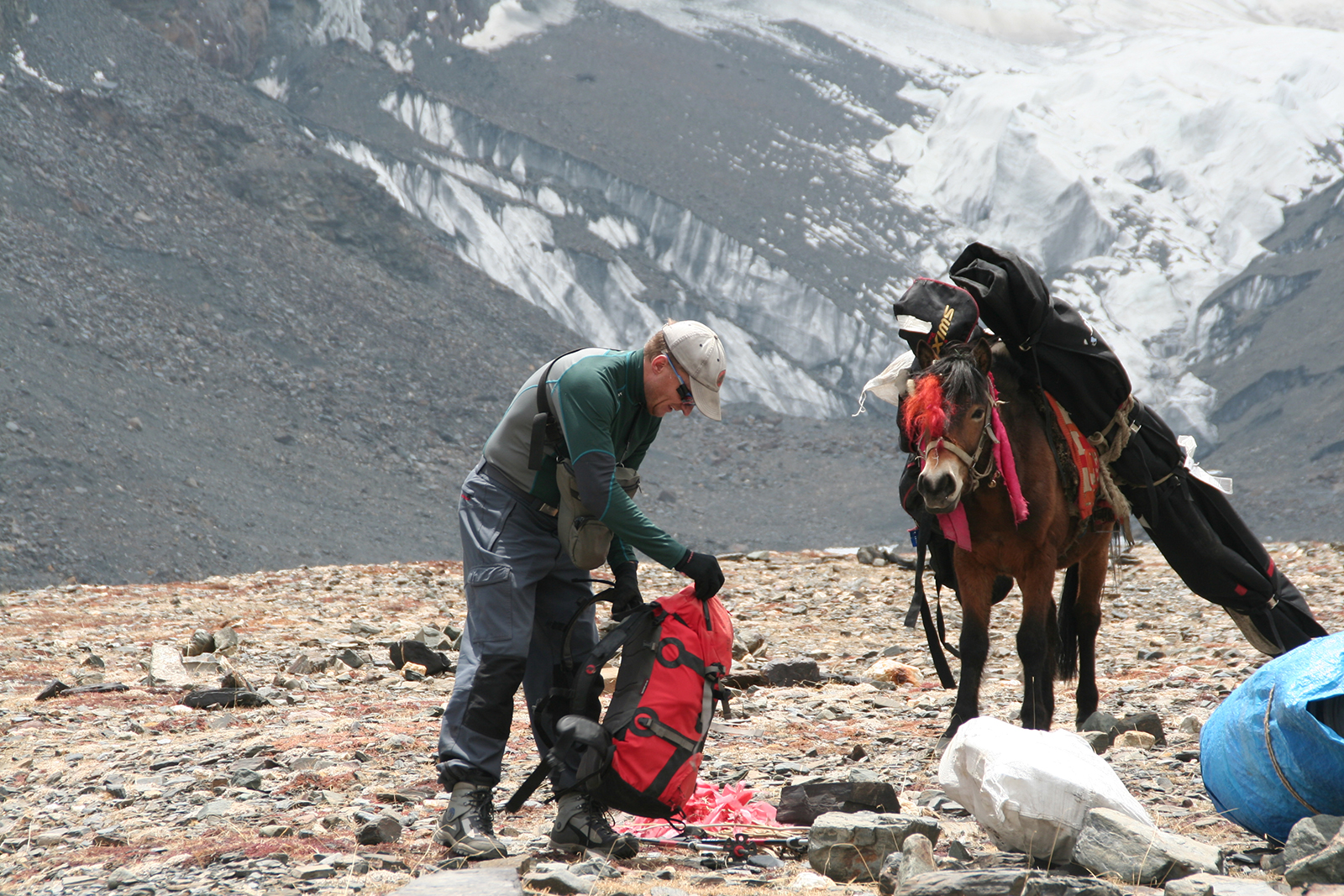 But practically speaking, I think given the antiquated gear, the outlandish nature of the objective, a first American ski descent of an 8000 meter peak ,the most difficult peak was Shishapangma. No one thought we could pull it off, including ourselves. At the time, the AT gear was extremely bulky, heavy, and lacked performance. Even our camping gear was a hodgepodge pile of used, threadbare crap, coupled with a low budget for everything else. We were climbing totally pure style.

Everything was stacked against us. And we had never climbed to 8000 meters. So mentally it was really a stretch. But we had a decade of experience behind us and we were super fit and strong. We took it literally a step at a time with the notion that we’d simply climb as high as we could and then ski down, not really believing we could pull it off. Everything worked out and we got the job done. 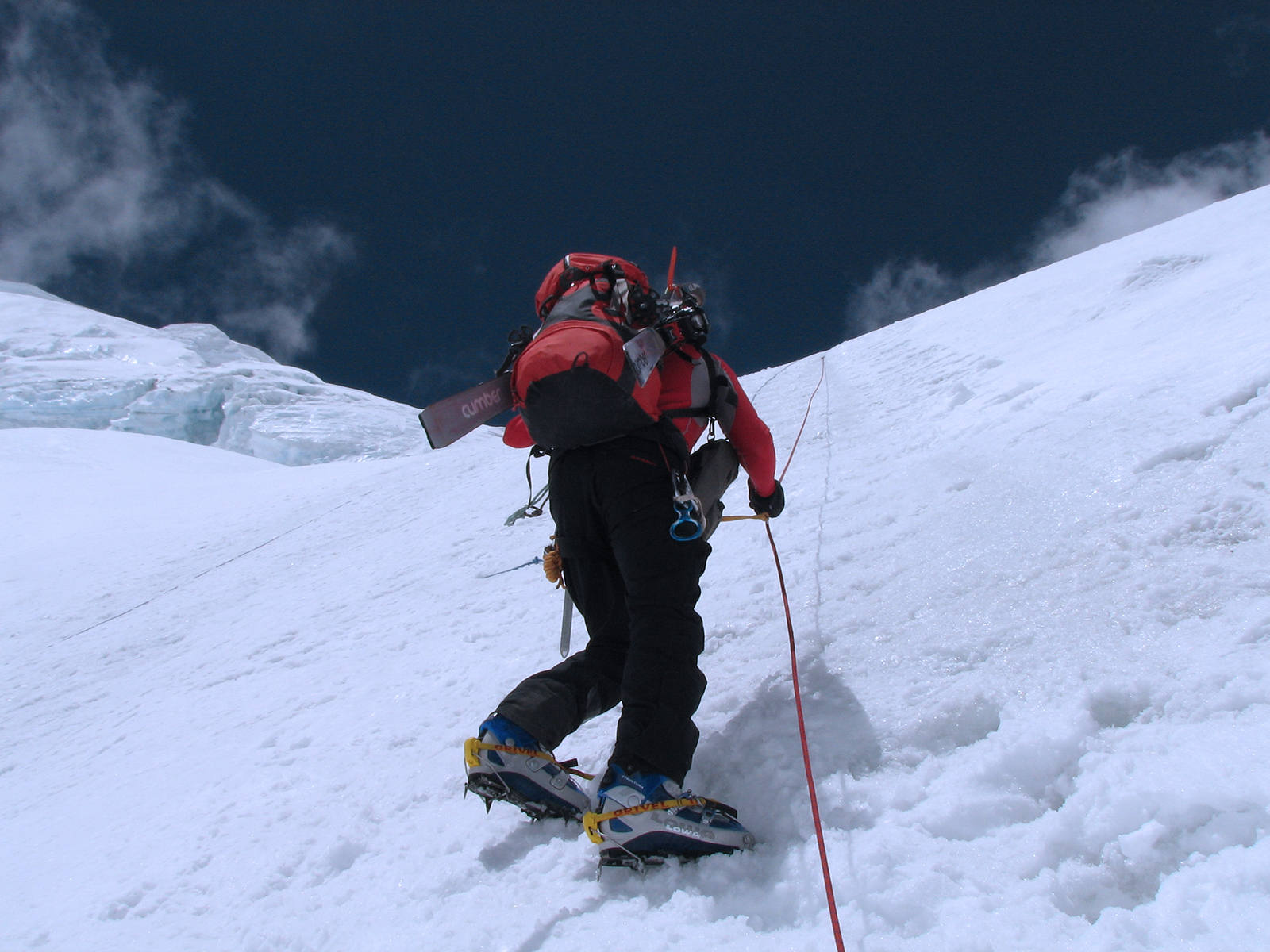 Is it harder to go up or down?

What a lot of climbers don’t fully understand is that for ski mountaineers, the ski gear adds 20 -30 pounds of additional weight to the equation. At the high altitudes, ounces make a big difference. For the high-altitude ski mountaineer, and for us not using any porters for our climbs, additional weight is a massively difficult aspect that really changes the game and expectations. Also, climbing in AT ski boots, even with today’s light technology, is not remotely as efficient as high altitude boots. They have little angle angulation, are not remotely as warm, and are cumbersome by any comparison.

So for a ski mountaineer, the uphill battle is extremely difficult. But it feeds into the descent. When you take weeks to set camps, and then climb to a high summit, you are flat-out tired. When you get ready and click into your skis, you feel that fatigue immensely. Until you actually push off, at times you feel like you forgot how to ski. Even when you get your ski legs back, it’s difficult in that you are doing a sport, skiing, that is really an anaerobic sport in an environment where you simply can’t go anaerobic; you never recover. 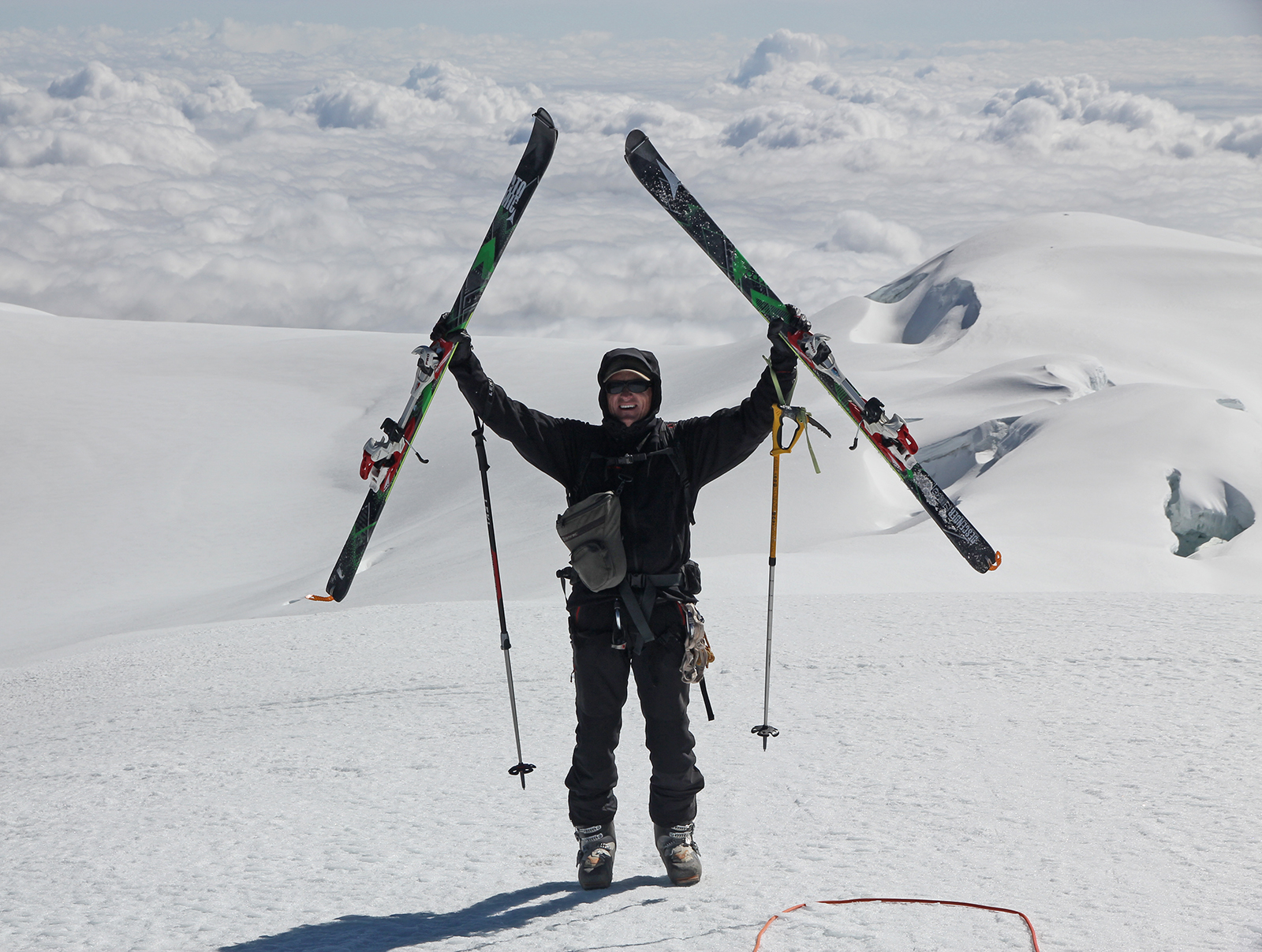 So it’s not pretty skiing. There’s a saying in high altitude skiing: when the going gets tough, you click out of your bindings and into your crampons. Contrary to what many believe, that skiing down is much easier, it’s not remotely as easy as climbing down. It can be quicker, but it’s definitely not as easy.

* Check back for Part Two of our interview with Mike Marolt.

** Click here to watch the trailer of BEYOND SKIING EVEREST.